This year, way back on the 14th of February my Wife got me a Valentine’s gift of the Lego Technic Heavy Lift Helicopter. Most people will agree that’s a pretty bad ass V-day present and anyone who know me knows it’s a bad ass V-day present. If you didn’t already know, my love of Lego is only rivaled by my love of video games (I’m downloading the latest update to Elite: Dangerous as I type this. Let’s see how that goes). 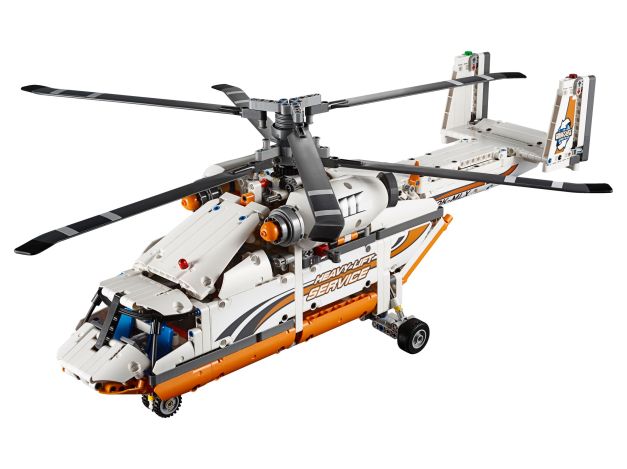 It clocks in at just over a thousand pieces (helpfully split into ten bags that mostly make sense) which makes for a decent build. It comes with some relatively rare pieces such as the rotor blades and, from what I’ve read, the 19L flexi-axle as well as the less rare but nice to have packed in power functions, a small motor and battery pack. It also comes with a sheet of decals which were better quality than I was expecting which was a nice surprise. I find Lego can be a bit hit and miss when it comes to stickers, but in this case I’m happy they got it right. (Loot at that, Elite is already updated!). It also comes with a thick manual. On the back of the box it shows the B-model, a twin rotor Chinook affair (they call it a tandem helicopter which puts me in mind of those bikes which is apt enough) which only looks OK but the manual only covers the A-model, the heavy lifter itself which is a little disappointing but a little poking around the Lego website finds it as a download which is alright I guess.

The biggest seller for me on this set has to be the contra rotating rotor blades. Like those little RC ‘copters you can find, the top rotors go one way and the bottom the other, eradicating the need for a tail rotor to keep the heli from spinning out. I was definitely looking forward to seeing how they achieved that with Lego. The other power functions included a lowering rear loading ramp, a powered trap door fuselage and a winch. There are also a couple of control surfaces on the tail which can be manually moved to the desired position. There is a kind of shock absorber assembly for the rear landing gear but it’s not sprung in any way.

The build itself was fairly interesting. It took me two evenings after the kid went to bed to finish it. A lot of it wasn’t overly interesting, the frame work was pretty much standard fair for anyone familiar with Technic Lego with a lot of paneling and a few clever structural sections. The power train looks very similar to a lot of ones I’ve seen before using slip shift gears to select where you want the power to go. Nothing new here but it’s still pretty well done and a joy to put together. As I expected putting together the contra rotating assembly was very interesting and it was very pleasing seeing how Lego did it, would be happy to see this set up in future Heli sets. The way the rear loading ramp lowers is more complicated than I expected and quite clever with it even if it did feel a little over engineered. The winch and trap door where a lot more straight forward, as was the rest of the build.

Overall I definitely enjoyed building this set but it’s not without it’s flaws. The switch for powering the power functions is in a very awkward place (it’s located underneath the cockpit on the bottom of the fuselage) and could definitely have been engineered a lot better. The winch is painfully slow, speeding it up would be a fairly simple process in a build like this and it feels like an oversight that it’s so slow. The same could be said of the trap door. The blades don’t exactly rotate fast but you can understand why Lego wouldn’t want to sell a set with fast rotating blades (even if they are just plastic). One of the biggest problems I have with this set is in the tail. The tail itself is plain in the extreme, the control surfaces have minimal complexity and in a set like this it really makes no sense. There’s plenty of room behind those plates to put in a more thorough and thoughtful control system but it’s just not there.

It seems to be endemic in this set. The designer put a ton of thought into the power train, the contra rotating blades and the rear loading ramp and started running out of steam after that. Very little thought seems to be put into the rest of the set with an excess of paneling, poor control locations and slow power functions. This set could easily be one of Legos best but it falls short. That said, while it isn’t perfect, it’s still an excellent build and definitely worth buying for your perspective Valentine if they at all like Lego.

On a similar note, I’m looking for the Star Wars Lego set of Rey’s Landspeeder, and if I’m lucky enough to find one, I’ll post a review!